2012: A star (block) is born in Dover, New Hampshire to a newly graduated poet. I didn’t have a sewing machine at that time, so this star was hand-sewn together. And then I made a few more with equally busy fabric. I never had an idea of what I wanted this project to be. Initially, I considered these as throw pillow covers. Then I sewed the entire quilt-top to a vintage, green-patterned sheet to make a quilted duvet cover that I never used. I moved from Dover, NH to Kittery, ME (2013) and from there to Astoria, NY (2014) and then Brooklyn, NY (2015). All the while, this star-quilt-posing-as-duvet-cover languished in a box, unused and insecure and slightly stained from a hard water leak.

After the Water Protectors at Standing Rock were attacked with dogs and water cannons, I wanted to find a way to give more. I donated money towards their legal defense fund, but pulling together a quilt to benefit causes like Standing Rock seemed the most natural to me. Hand-quilting takes time. There’s mediation in it, and for this quilt I used that reflective space to focus on prayer for those on the front lines: fighting pipelines, protecting wildlife and wilderness, ensuring the safety of this country’s citizens regardless of their race, religion or gender identity. It’s a tall order for one quilt to encapsulate all these hopes and prayers, but it felt good to just exist in that well-being and have faith in the future.

Once I decided to pull together a quilt whose sale would benefit Standing Rock Sioux and other charitable organizations, I began the arduous task of stitch-ripping the star quilt as quilted duvet cover. I found a bright, cross-hatched turquoise backing fabric and used my favorite organic cotton batting. Squaring up large quilts are difficult in my small Brooklyn apartment, but somehow I muscled through it and used the leftover navy cotton fabric as binding. (Navy-colored binding is my new preferred color as it won’t show stains from wear, but is softer than black binding.) Then it was just two months of hand-quilting, my favorite part of the quilt-making process.

This quilt is going to live with painter Erin E. Murray in Virginia. Portions of this sale will be going to: Standing Rock Sioux Tribe, Center for Wildlife (York, ME), Eastern Massachusetts Abortion Fund and Return to Freedom. 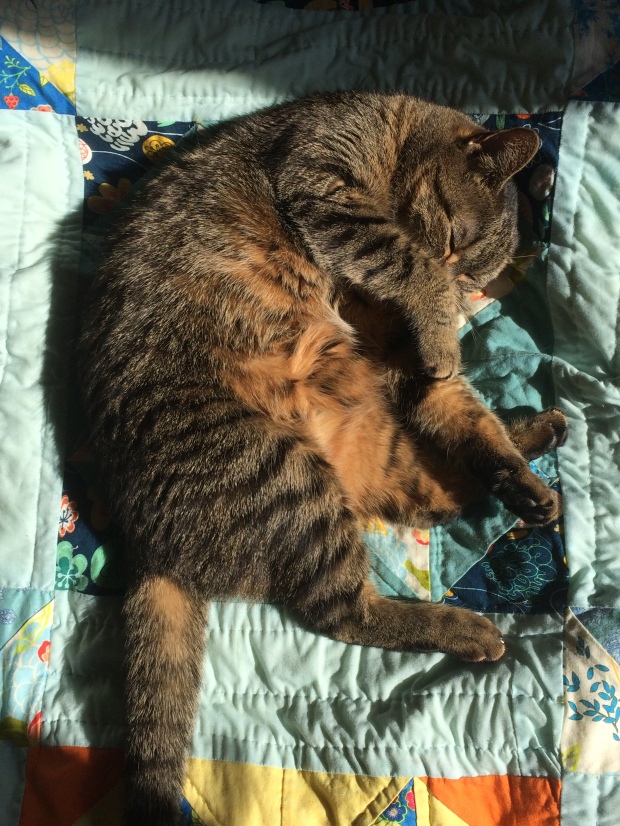